Our music program has grown from a very humble beginning into one that is known statewide and that has become one of our most effective evangelization tools.

Holy God, We Praise Thy Name: How it All Began

In February of 1992, when our two American priests arrived in Vladivostok, they found that no one knew any Catholic liturgical music or religious hymns in his own language! This was largely due to the utter destruction of the Catholic Church in Russia. Catholic hymns in Russian were not to be found, so we decided to see what the local Protestant community had to offer.

The first Russian-English translator for our priests, Mr. Igor Davidov, was a new member of the Seventh Day Adventist Church. (He later became a Catholic.) Fr. Dan asked him if his Adventist parish sang hymns in Russian. He said of course they did. Fr. Dan asked him to hum one of the melodies. He did, but Fr. Dan did not recognize it, so he asked him to hum another one. Again, it was not familiar. But the third one was clearly the melody usually of traditional German Catholic favorite “Holy God, We Praise Thy Name.”

Fr. Dan began to hum along, and then asked Igor if he could get the Russian words that the Adventists sang. The next day Igor brought a copy of the Russian Adventist hymnal Psalms of Sion, published in Moscow in 1927. He translated the text into English so that Fr. Dan could hear if the words were compatible with Catholic doctrine. They turned out to be a very good Russian translation of the exact meaning of the Catholic hymn.

Because one hymn is not enough for a Sunday Mass, Fr. Myron also decided to teach the people the most simple version of the Latin Sanctus. So Fr. Dan made a hymn sheet with these two songs and led a music rehearsal for all the people present. The Roman Catholic faithful of Vladivostok have been singing in Russian and Latin ever since.

In 1993 Fr. Dan founded the Russian Liturgical Music Society of St. Augustine to find, translate, compose, and disseminate beautiful liturgical music in Russian suitable for the Roman Catholic rite. Their first published hymnal, My Soul Proclaims the Greatness of the Lord, was printed in 1994. The first printing of 200 copies, with 40 hymns and Mass parts, was printed on a small, tabletop copier. A second edition containing over 130 hymns and Mass parts, followed in 1998. 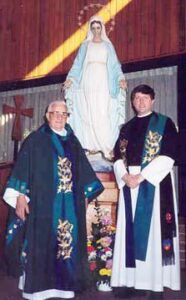 Fr. Bernard Reiser of Coon Rapids, MN, with Fr. Dan. In 1995, Fr. Reiser donated to us a 1973 Rodgers electronic organ. Only because of this organ has the parish in Vladivostok been able to make such progress in liturgical music development.

Translating hymns is more difficult than one would think. It is a great challenge to express well the mysteries of our Christian faith and the praise of our hearts and minds in good Russian within the confines of easy-to-sing, metered melodies, especially in Russian, where words may be eight syllables long.

Our music program continued to grow with the founding in 1996 of our organ concert series of sacred music. It started with two concerts a year, but now offers a number of performances with the demand for tickets still growing. We started with one performance of a Christmas concert and had a capacity crowd of 200. In 2003, we put on four performances of the annual Christmas concert, attended by over 1000 people. The tickets sold out in only 18 days! Since then, we have come to have Christmas and Easter programs, plus concerts featuring invited world-class professionals.

A Variety of Instrumental and Vocal Music

Although the concerts have always been billed as organ concerts, it was soon decided that the concerts would be more appealing to a wider audience if they included a variety of musical instruments and vocalists. Thus, we invite a number of local instrumental and vocal soloists and chamber ensembles to participate in many of our concerts.

The Catholic Concert Choir of Vladivostok 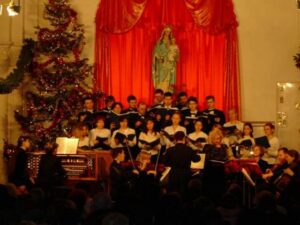 The Catholic Concert Choir of Vladivostok performs during the Christmas 2003 concert, along with the Regina Angelorum chamber orchestra.

We also started a professional Catholic concert choir to perform a repertoire of only sacred music. Eventually, the 25-member choir, mainly of voice and choral directing students at the Arts Institute, started rehearsing, and gave their first program in December, 2000. Two of their performances were professionally recorded, and from them our first professional CD, The Joy of Christmas in Russia, was produced. Since then they have sung at each successive Christmas and Easter concert, receiving very favorable reviews from the concert-going public, the local media, and our parishioners.

Another development occurred in 2001. Concert organist Marina Omelchenko had long wanted to gather a group of string players to develop concerts of sacred music. The right time came with the return to Vladivostok of our parishioner Diana Nam. When Diana graduated from the famed Moscow Conservatory of Music, she returned home to Vladivostok.

Knowing how well she played, Marina asked Diana if she would be willing to start a four-member string ensemble to play regularly at our concerts. Diana agreed, and the chamber orchestra, Regina Angelorum, was formed. Today, the group includes 10 to 12 instrumentalists including wind and brass players. 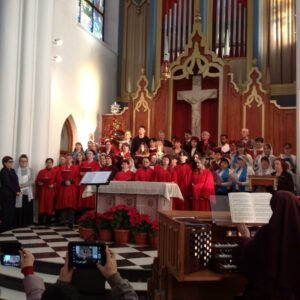 An ecumenical service with choirs from other churches in Vladivostok.

In 2004, in an effort to bring together choirs from different denominations, we assembled an ecumenical choir of 60 people including Catholics, Lutherans, Methodists, Presbyterians, Baptists, and Evangelicals.  Our resulting first-ever ecumenical Easter concerts were a smashing success.  The tickets all sold out well in advance. All but one of the pastors were in attendance.  The entire project has brought us a priceless amount of good will and collegial cooperation in the Protestant community, and lots positive PR in the city and state.

We have learned that we must use different methods to introduce people to the Gospel. With around 4,000 people attending our concerts each year, we have found that more people come to us through sacred music than through any other means.

These concerts have become the most successful concert series in the history of the city. The organ itself seems to be one of the biggest reasons for the success. Our church has the first and only real concert organ in the state. But the reason is not just the organ; it is also our concert format: between the musical selections, an announcer reads briefly from a carefully prepared script about how the music relates to the feast or reason for the concert. The scripts are taken from the Bible and other reflections on the mysteries of our Faith.

Several people have told us that their first introduction to the Christian Faith was through our “evangelization” concerts. Later they entered RCIA and became members of our Church, or another Christian Church, or if they were already baptized they became more active participants.

Resting in the Lord

It is difficult to explain the unparalleled success of our sacred music concerts in Vladivostok, which is a quintessentially Soviet, atheistic city. Our sacred music organ concerts are always filled to capacity, even as we multiply their performances. Many people return again and again for each new concert program. Others tell us that it is very difficult to obtain tickets. People would not return so often just out of curiosity. Other factors would be the beauty and the newness (for Russians) of the masterpieces of sacred music; the power and dignity of the organ; the talent, professionalism, and discipline of our musicians and artists; the accompanying narration of the religious theme of the concert; and the perfect acoustics of our neo-Gothic church, along with its sacredness and the beauty of its stained glass, marble crucifix, icons, statues, and stations of the cross.

Perhaps it also has something to do with St. Augustine’s famous prayer, “O Lord, you have made us for Yourself, and our hearts are ever restless until they rest in You.”

To contribute to this outstanding evangelization effort, please click below.