Historically, the predominant religion in Russia is Russian Orthodoxy, a branch of the Eastern Orthodox Christian Church. (Eastern Orthodoxy and Catholicism were divided in the Great Schism of 1054.)

After Russia became a communist totalitarian state with the revolution of 1917, the militant atheism imposed by the government persecuted all religious beliefs. The communists destroyed thousands of churches (mostly Russian Orthodox). All but two Catholic parishes were liquidated, the buildings being destroyed or converted to other uses (e.g., archives, animal stables, libraries, museums—even museums of atheism). The Soviet Union collapsed in 1991, and the Communist Party was outlawed.

Religion in General during the Communist Period (1917-91)

The Pieta window at Most Holy Mother of God Catholic Church in Vladivostok.

In the first 20 years of communism (1917-37), Russian Orthodoxy was persecuted almost to extinction. Hundreds of thousands of priests, sisters, and brothers were murdered by communist government agents. The surviving remnant of Russian Orthodoxy was allowed to exist under communist totalitarian control to help rally the people to fight the Nazi German invasion in 1939.

Some churches were allowed to stay open if they were licensed by the communist government, but they were very restricted in what they could do. They could celebrate liturgies and the sacraments, but they could not teach religion, either to children or to adults. The Orthodox Church became highly regulated by of the Soviet government, with all newly ordained priests and bishops becoming agents or cooperators of the Secret Police (KGB).

All children were forced to learn and believe atheism as scientific truth in all levels of school and in all youth organizations. No private schools or clubs were allowed. The harsh religious persecution and the Stalin terror (1927-52) made parents afraid to tell their children about God.

Between 1917 and 1937, more than 50 million people were murdered by KGB extermination squads or in death camps, and 8 million people starved to death in man-made famines designed to consolidate communist power. All land was confiscated by the state.

Within two generations, Russia became a predominantly atheistic society. When freedom of religion was returned in 1991, less than 25% of the population was baptized. Even today, less than 1% actively practice any faith at all.

Religion in Vladivostok before and after Communism

Before the Communist revolution, Vladivostok was home to 36 religious parish organizations, primarily Russian Orthodox, but also Protestant, Catholic, and Buddhist. After 1922 (only five years after the Communist revolution) only one Russian Orthodox church remained in the city. Approximately 28 church buildings were destroyed, and the remainder, including Most Holy Mother of God Catholic Church, were converted to use for other functions.

A Lutheran church became a warehouse, then was used as a navy museum. The Most Holy Mother of God Catholic cathedral was converted into a social club. Later, it was made the state archive building, made possible by the addition of three floors and many brick walls in the interior. A Russian Orthodox church and its cemetery were destroyed and an amusement park and dance hall were constructed on the site. The Russian Orthodox Cathedral of the Dormition (Assumption) of the Blessed Virgin Mary was blown up on Easter Day, 1937.

The lone Russian Orthodox Church that had been allowed to remain open was closed in the early 1960s, leaving the entire city of Vladivostok without a single church.

In April 1991 Pope John Paul II restored the hierarchy for the first time since 1923 by naming two new bishops for Russia: Archbishop Thaddeus Kondrusewicz (for the European part of Russia, with its center in Moscow), and Bishop Joseph Werth, S.J. (first Apostolic Administrator of the Asian part of Russia, with its center in Novosibirsk, Siberia, 4,000 miles northwest of Vladivostok). At the time of the appointments, Vladivostok was located in Bishop Werth’s jurisdiction. 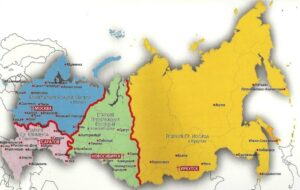 The 4 dioceses in Russia are shown here in blue (centered in Moscow), pink (Saratov), green (Novosibirsk), and gold (Irkutsk). Our own diocese of Irkutsk covers 3,486,000 square miles. Only 4 countries in the world are larger than the diocese of Irkutsk.

The Growing Church in Russia

As of 2021, there were about 230 Catholic parishes in all of Russia, compared to only 2 in 1989—one in Moscow and one in St. Petersburg.  These were kept open only because they were the property of the French government, who insisted that they remain open, although in some years there were no priests to serve in them.

Currently, about 245 priests from Poland, Italy, Slovakia, the United States, India, and other foreign countries are serving the Catholic population. Sisters from the United States, Spain, Korea, and other countries are serving as well. Russian-language Catholic publications are also increasingly available, including hymn books, pro-life newsletters, prayer books, and catechetical materials.