Following some mock trials by the communist tribunals, each was found guilty of actively participating in a Polish religious counter-revolutionary organization. In February 1938 they were all executed by firing squads, then buried in mass graves on the outskirts of Vladivostok, along with numerous other victims of Stalin.

For more than a century, the Polish patriots were persecuted, arrested, and deported to hard labor camps in Siberia, Kamchatka or Sakhalin Island. Most of those who died remained scattered in unmarked graves throughout the Russian Territory.

Very few survivors found their way to the eastern outpost in Vladivostok, where they settled out of desperation. Always faithful to the Roman Catholic faith, they purchased a piece of land, and in 1900 built a wooden church.

In June 1909, Archbishop Jan Cieplak blessed the cornerstone during the ground-breaking ceremony. The construction encountered continuous financial difficulties and an extremely unstable political situation during the First World War, the period of the Bolshevik revolution and the following civil war. Finally on October 2, 1921, the Vladivostok dean, Reverend Karol Sliwowski, consecrated the cathedral.

Unfortunately, it was just the beginning of a ruthless campaign against all religions with the goal of eradicating the notion of God from people’s minds and from the daily life.

The communist Central Committee CK WKP selected a Bolshevik, Miniej Israelewicz Gubelman, as the chief planner of destroying religion in the Soviet Union. Gubelman came up with an action to exterminate all church activities. The Roman Catholic and the Russian Orthodox priests were arrested and by the thousands deported to the hard labor camps with almost no chance of survival. Tens of thousands of clergy and the faithful died. The Catholic and Orthodox churches and monasteries were closed or confiscated and used as libraries or for storage. All items of religious art were stolen or destroyed.

In 1930, Bishop Karol Sliwowski was arrested and deported to Sedanka near Vladivostok. He remained under house arrest and died two years later. His only assistant, young Reverend Jerzy (Ludvikovich) Jurkiewicz, lasted less than a year caring for the parish before being arrested in 1931. He was accused of participating in a subversive Polish religious organization and considered also as a spy for the Japanese Consulate.

In 1932, a jury of three NKVD judges sentenced him to ten years of hard labor in Siboboz camp in Siberia. According to the records of the Military Archives, Reverend Jerzy Jurkiewicz died on June 4, 1942 in a labor camp in Siberia. He was buried in an unmarked grave, the same as hundreds of thousands of other Polish and Russian clergy and civilian prisoners.

With both priests gone, the steadfast group of Polish faithful Catholics selected Marcin Maliniewski as their leader. They kept the cathedral open and frequented there under the suspicious vigilance of GPU and the Soviet authorities. Meanwhile, the Soviets kept raising the taxes on the cathedral higher and higher. Eventually, the small group of Poles became unable to raise the money. In 1935, the Soviets confiscated the buildings and declared them abandoned. They made a storage area there and in the cathedral they placed the Bureau of State Archives.

Catholics then gathered for prayers and the rosary in different private homes. Still, the agents of the police and GPU (NKVD) continued to maintain an incessant vigilance.

In September 1937, they arrested Sigizmund Brzezinski, Anton Gerasimuk and his son Waleriy Gerasimuk. A few days later, GPU arrested Jan Strudzinski, Marcin Maliniewski and several other Polish Catholics. They were accused of participating in the illegal Polish subversive religious organization.

The GPU tribunal carried out their cruel interrogations, but the arrested patriots did not divulge any names of the local faithful. All five men were sentenced to death. The execution by the firing squad took place on February 3, 1938.

Nevertheless, a small, tenacious Polish community in Vladivostok never ceased praying and saying the rosary. The children and the grandchildren were brought up with deep Catholic beliefs and traditions. 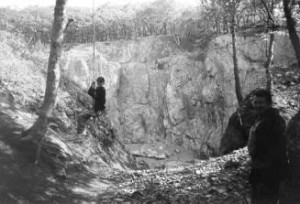 Rock pit where “enemies of the people” were executed during the Stalinist reign of terror. It is near a mass gravesite just outside of Vladivostok.

A mass grave of Stalin’s victims was discovered in 1991 in the woods near Vladivostok. This occurred due to the efforts of an organization called “Memorial.” Among the victims, there were people from different nationalities and a significant number of Poles.

In recent years, several Holy Masses were celebrated for the innocent souls of the Polish martyrs under the memorial cross erected in that place.

Hopefully the names of these faithful and their sacrifice will never be forgotten.

In time, the evil empire disintegrated and the government pressure subsided. Fresh activity commenced in Vladivostok in the Polish Most Holy Mother of God Catholic parish. The cathedral building was reclaimed and a new priest, Reverend Myron Effing, CJD, arrived from the United States. Many Poles started coming to his services. It is amazing that during almost a hundred years, despite the Soviet persecution and the prohibition of all religious and cultural activities, the Poles preserved their language, customs, and above all, their faith.

Today, the Catholic parish in Vladivostok has completed the addition of bell towers and steeples, and beautiful bronze bells ring out regularly. The bells were struck in Poland and blessed by the Holy Father, John Paul II, during his last visit to his homeland.

The bells were donated by the Siberian Polish Fund to commemorate those Polish who suffered so much for their faith. It is hoped that the faith of the children of these martyrs, exiled patriots, and political convicts will remain alive for many years.

A related article can be found in the March 2000 issue of the Vladivostok Sunrise newsletter.