In the early part of the twentieth century, the far east of Russia was populated by many Polish settlements. We have 7 sainthood candidates who lived in the city of Vladivostok. Pope John Paul II asked that information be gathered on these and other Russian martyrs as quickly as possible before the eyewitnesses are all deceased. If you have information that would help us, please contact us at the U.S. office.

When the ravages of the 1917 communist revolution finally reached the city of Vladivostok, which was located at the end of the Trans-Siberian Railroad, it had devastating effects on the Catholic as well as the Orthodox populations.

All Catholic clergy were first arrested and sent to labor camps. Soon after this, the parishes were closed down. Parishioners were harassed and intimidated in numerous ways. Many were executed, suffering “red” martyrdom. Others, although they were not executed , nonetheless suffered “white” martyrdom for the Faith. 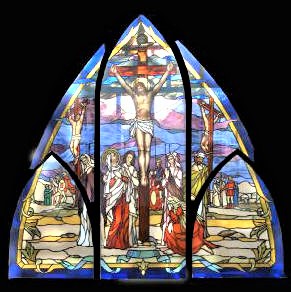 Window of the Crucifixion in our Chapel of the Martyrs.

One such white martyr was the beloved first bishop of Vladivostok, the Most Reverend Karol Sliwowsky. Bishop Sliwowsky’s cathedral and his episcopal residence were taken away from him. He died shortly thereafter while confined under house arrest.

The rector of the cathedral, Fr. Jerzy Jurkiewicz, who also acted as the bishop’s personal assistant, was reportedly last seen in a gulag with one eye missing. He was never heard from again.

Five laymen, all Russian Polish, were killed after they were discovered praying the rosary. Below is a list of the five parishioners of Vladivostok Catholic parish who were arrested by the Communist security police in 1937 and disappeared.

NOTE: The first spelling listed for each first name and family name is in Polish, although without the special accent marks. The spelling of the patronymic name (in parentheses) is in Russian transliterated into American English spelling based on pronunciation. The patronymic is a second name that all citizens of Russians use, based on their father’s first name with the suffix “ovich” or “evich” for men and “ovna” or “evna” for women.

Additional information on our sainthood candidates can be found in the March 1, 2000 issue (Number 32) of the Vladivostok Sunrise newsletter.